Brad and Jackie Schultz and their family have lived on “Tower Hill” Station, north of Muttaburra, for nine years. Originally working in Brad’s family business and contract crutching, Brad and Jackie were given the opportunity to start buying portions of “Tower Hill” from Brad’s parents in 2017.

Brad and Jackie Schultz and their family have lived on “Tower Hill” Station, north of Muttaburra, for nine years. Originally working in Brad’s family business and contract crutching, Brad and Jackie were given the opportunity to start buying portions of “Tower Hill” from Brad’s parents in 2017. Now the owners of three quarters of the 40,000 acre property, they are focused on building their breeder numbers and continuing their expansion.

“Instead of just giving it to us, if we wanted it we had to buy it and it certainly makes you appreciate it and gets you out of bed each morning,” says Brad.

“Tower Hill” is split into three major country types, accounting for roughly a third each – spinifex, open downs and channel country, which overall carries roughly one beast to 35 acres. The Schultz’s feel that this mixture of land type makes “Tower Hill” relatively safe country as the variety gives them options.

As a result, Brad and Jackie are astute managers of their country types, maximising the production they can gain from the season while retaining the cows’ body condition scores, supplementing where necessary, all without overgrazing.

“We use the spinifex country later in the year when the season gets a bit tight as it responds more quickly to small falls of rain. It also gives the heavier black soil downs country an opportunity to respond to the wet and recover,” explains Jackie. “We feed M8U (molasses and 8% urea, coupled with rumensin, a rumen modifier) and a molasses-based mix when the cows need it to remain in the right body condition score”.

The Schultz’s run a herd of 750 breeders that are predominantly a Brahman composite cross, with a growing proportion Angus cross. All cows are joined to Angus bulls, sourced from a northern NSW seedstock operation.

“We have stuck to the one seedstock operation where we buy our bulls from. They are very genetics and performance focussed, and we have a good relationship with them, they understand our operation and can help us find bulls suitable to our environment,” says Brad.

“We have been using Angus bulls for 7-8 years, we started off with one and have been going from there,” adds Jackie.

When looking to purchase bulls Brad and Jackie prioritise scrotal size (correlated with early maturity in female progeny and shorter postpartum anoestrus, or days to calving), temperament, birth weight for heifer bulls and then 200, 400 and 600 day growth. Slick coats are also a major consideration.

“Slick coats are a big thing for our operation. We don’t go for the hairy ones because they can’t cop the heat and can’t disperse it, and it is hot here compared to where they are used to,” explains Brad.

Brad and Jackie believe that acclimatising bulls is vital and buy their bulls in July and let them acclimatise until Christmas.

“We let them roam around, get used to everything, acclimatise. The bulls we brought up this year haven’t missed a beat; they are in good condition. It’s absolutely key to let them acclimatise, don’t just bring them home and throw them in with the cows,” says Brad.

The bulls are carefully managed post joining and are fed a supplement once removed from the cow herds and given time to regain condition for the remainder of the year.

“Joining has to be seasonal. When they are working, they are working at the best time of year. As it starts to turn, they come off onto good feed and then as it dries off, they get a bit of M8U here at the house, they aren’t working in the hard time of year,” says Brad.

The breeder herd is joined for four months each year, ideally starting in early January, depending on access across the channels, joining at approximately 3%. Brad and Jackie think that this ratio may be too high as there is a fair bit of fighting between bulls and a few injuries and are planning to trial joining at 2.5%.

“Angus know what to do, they don’t need any extra players,” says Brad.

Calving from October onwards, a portion of the progeny are sold into the weaner market while the remainder are taken through to feeder weight (400kg) on the downs country as yearlings the following February/March, depending on the season, feed availability and cash flow requirements.

“We calve early for our area, it works best for us and lets us sell weaners into an early market or have cattle at feeder weight to sell early the following year. If they have had a decent season down south and have reasonable winter crops it provides a good market for our weaners – particularly our Angus cross animals,” says Brad.

“Ideally, we would like to consistently target the feeder market, but we will probably always have to sell weaners from a cash flow and overgrazing perspective. 2020 is the first average year we have had in the last decade, we have just been trying to survive” adds Jackie.

Replacement heifers are selected as weaners on a range of criteria such as depth, temperament, slick coats and Angus content and are joined for the first time as yearlings weighing approximately 300kg.

Fertility is a primary driver for cattle production on “Tower Hill”. Preg-testing is conducted every year, with any preg-tested empty (PTE) maiden heifers culled and taken through to feeders with their year-drop counterparts.

Those that go on to calve have their calves weaned early to give them time to recover prior to joining as re-breeders, a strategy that appears to be working, with 98% of the Angus cross second calf heifers PTIC in 2021.

For the wider breeder herd, the Schultz’s are currently employing a two-strike system where if a cow presents at branding without a calf, she is given a second chance but if preg-tests empty is culled. The breeding herd averaged 83% pregnant across the entire herd for 2021, having joined on the back of 75-100mm of rain.

“Because we are trying to build numbers and with the way the market is at the moment, you can’t afford to buy the replacements, we have resorted to giving our cows two strikes. We used to only give the cows one miss, but because it was so dry and we got so behind in the seasons we were pushing them too hard so we have had to ease the pressure off, they were just working too hard,” says Jackie.

The prolonged drought conditions that Brad and Jackie have been operating in has had significant influence on their breeding decisions and they are cautious of their herd becoming ‘too soft’ and unable to handle the tough conditions if they get a mediocre season.

“We have been burnt with so many hard years. Our cow base isn’t pure bred brahman by any stretch, they are a softer crossbred brahman base and you can get very soft calves. We can’t have them too soft because when it shuts up shop and stops raining, we are worried that they will go to pieces. They need a bit of toughness,” says Brad.

“We like the soft crossbred Angus progeny; they sell well into the southern market but have the adaptation we need for our environment. It is easier to look after the 20 odd Angus bulls we have, than trying to look after 750 softer breeder cattle,” adds Jackie.

“If the cows are too big, they take too much grass to produce. It’s great to have a big cow that dresses well at the abattoir, but we are chasing calves out of her in mediocre seasons, so she has to perform rather than be fat and big,” explains Brad. 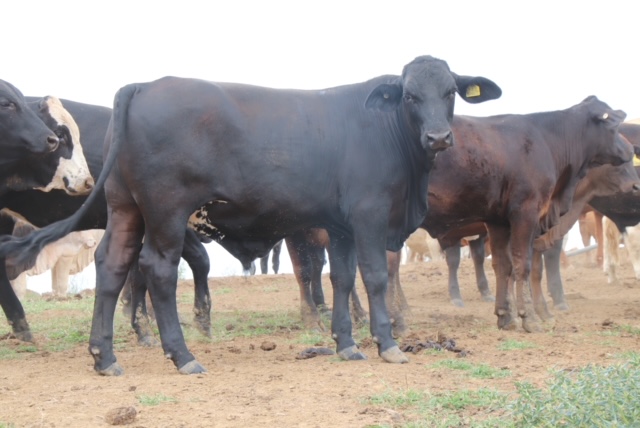 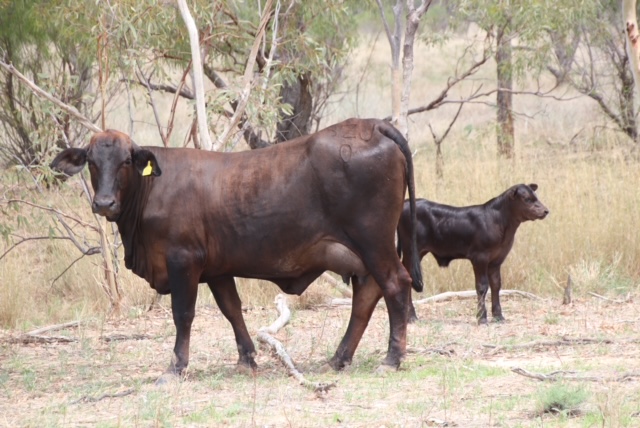 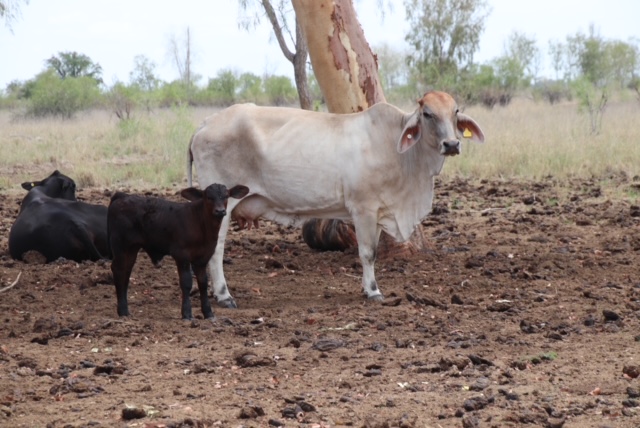